For a long time, we have suggested that because of China’s GDP growth being driven primarily by investment, the end result will inevitably be over-capacity.  This has been apparent in industries such a ssteel, machinery and others (now even Caterpillar is exporting overcapacity in China, so to speak).  We also believe that the construction boom after the 2008/09 stimulus has already led to over-building of residential real estate.  The only problem we all have is that there are no accurate official statistics in China (like those in the US) that we are aware of for capacity utilisation.

A recent staff report by the International Monetary Fund (IMF) shows an estimate of capacity utilisation in China.  Interestingly, according to IMF’s estimation, China has been operating below capacity (albeit not unreasonably) even at the peak right before the 2008/09 financial crisis, and that was supported by external demand which no longer quite exists now. China has built even more capacity since then, which is able to serve the demand from a global economy does not exist.  Capacity utilisation has dropped from about 80% before the crisis to a mere 60% in 2011.  That compares with about 78.9% for the US currently for total industry (which is not very high by US’s historical average), and 66.8% at the financial crisis trough according to the Federal Reserve.  In other words, current capacity utilisation in China appears to be even lower than that of the US during the 2008/09 financial crisis.

With investment increasing by 5 percent of GDP over the past three years, staff estimates show that capacity utilization has declined from just under 80 percent before the crisis to around 60 percent today. This low rate of capacity utilization, together with continued low core inflation, suggests that there is large excess capacity in the economy. 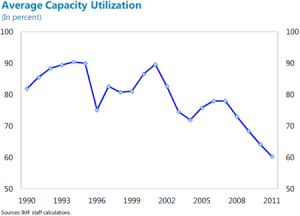 The estimates also show that China has had excess capacity for most of the past decade. The gap was closing in the run-up to the financial crisis, but did so based on an unsustainable level of external demand. Even in 2007, when growth exceeded 14 percent, nonfood inflation was low and stable, suggesting the economy was still operating below capacity. Then, in 2008, the government put in place a large investment stimulus that propped up growth and built out capacity in a range of areas. Filtering techniques which impose a cycle on the data would point to a negative output gap since 2007 even while price pressures were virtually nonexistent and excess capacity was growing.

This, in our view, strengthens our case that there will be no inflationary pressure in the longer-run.  In fact, we believe the future of China will be deflationary, except for food prices, which tend to be very volatile in China.

Given it is likely mostly lies, the most

It's a measure of how poor its wider recovery is.

Chinese credit off to the races

Again. New yuan loans for May were out last night

Some bloke at the ANU wants us to deepen ties