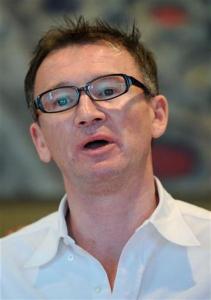 Hugh Hendry of Eclectica Asset Management hasn’t written for quite a while, nor has he been actively out there on the telly as his clients “ban him from media appearances”.

Hendry has been bearish on China for quite a while, since he posted a video talking in his Scottish accent in front of large empty buildings in China talking about bubbles. That was long time ago, and bulls must have thought that he was wrong.  But he made money from his short China positioning.

In his latest commentary to clients, I was therefore interested to find that, if anything, Hendry is more bearish on China and Japan, but relatively optimistic on the US:

This might be the year everyone else notices this; the year panic over Chinese economic growth comes to replace the market’s morbid fascination with the travails of the European continent and the year in which we see that the US is not giving way to China in terms of global economic leadership. There is a near consensus that China will supplant America this decade. We do not believe this. We are more bullish on US growth than most. The momentous nature of recent advances in shale oil and gas extraction and America’s acceptance of the unpleasantness of debt and labour price restructuring looks to us as if it is creating yet another historic turning point. By embracing his inadequacies and leaping on his luck, the strong man may have finally broken the binds that had previously held him back. We are also more pessimistic on Chinese growth than ever. This makes us bearish on most Asian stocks, bearish on industrial commodity prices, interested in some US stocks, a seller of high variance equities and deeply concerned that Japan could become the focal point of the next global leg down. On the plus side we also believe that we are much closer than before to the beginning of a bull market of perhaps 1982, if not 1932, proportions. We just need the last shoe to drop.

In his view, the problems we are see right now in the economy is a result of fixed exchange rates like the euro and the Dollar/RMB peg, somewhat akin to what happened in the 1920s and 1930s in terms of creating global imbalances:

Back then the relevant fixes were around the gold standard. Today it is the dual fixed pricing regimes of the euro countries and of the dollar/renminbi peg.

On China and the dollar/RMB peg specifically, he has rightly pointed out how we have come down to this.

China got accepted into the WTO, America set a course for a weaker currency post the NASDAQ crash and the dollar’s real trade-weighted value took a nose-dive. This was initially great news for the Chinese. Net exports as a percentage of GDP doubled in the two years from 2005. Then they doubled again. The overseas sector contributed less than 5% of GDP growth in the four years to 2004 but 20% between 2005 and 2008. At the same time the current account surplus reached its zenith at almost 10% of GDP.

According to the rights of economic principle at this point the renminbi should have appreciated considerably. This was not allowed to happen. The scale of Chinese FX interventions became legendary as bureaucrats sought to maintain the cheap currency…

… The central bank kept the deposit rate low, incredibly low…This appalling rate of return on bank deposits probably accounted for 20% of the decline in household disposable incomes as a share of GDP over the period 1992 to 2008 and significantly contributed towards the consequent collapse in consumption relative to GDP… Instead of accepting low rates on their money in the bank, they became a nation of property speculators…

It has long seemed to us to be the case that this economic crisis would start in the US and make its way to Europe. That has happened. However, we also think it will end in Asia.

Sinocism with the note: China advisers to

The news flow in the Chinese development sector