The property industry, and the political elite whose pockets are lined by awarding favour, have successfully hidden the greatest rent seeking scam in Australia – town-planning amendments.

Australia’s rich list is littered with fortunes made from an industry that on the surface appears competitive, and should not be overrepresented.  Such a pattern suggests there are rents being secured at low cost, making property development especially lucrative.

Each time an area is rezoned to increase the potential development density, by relaxing height and density restrictions for example, the landowner is gifted a new property right that greatly increases the value of their land.  They pay nothing for the privilege – it is a pure economic rent.

This rent is the prize pay-off for the development lobby groups, whose land-banking members make most of their money by lobbying for favorable planning changes in areas where they have bought land at a price reflecting lower value uses.

It makes sense to plan a city – to direct development to align with geographical, environmental and structural goals.  But it also makes sense to change the town plan when circumstances change.

So why do landowners receive new development rights created by town planning changes for free?

Miners pay royalties as a fee to the State for their rights to minerals.  Farmers now need to buy rights to water from rivers and groundwater systems if they want to expand their irrigation.  Even greenhouse gas emitters will soon need to pay for the newly created rights to pollute. But when rights are created under planning schemes, they are simply given away. And all we hear is silence.

There is a better way that simply borrows the principles applied elsewhere.  When the government (in this case, usually the Council) creates a new property right, it sells it, rather than giving it away for free.

These development rights could be auctioned or sold at a fixed price, and would most likely ‘attach’ to the land title once bought by the landowner.  There would be no limit on the quantity available in a particular area, but physical limits of developable sites would mean a finite amount of demand for these new development rights in any case.

Selling and trading development rights is not uncommon globally.  In Brisbane, the right to develop the air space above Milton Rail Station was sold to a private developer.  The Brisbane City Council has considered selling development rights that may have existed on the site of City Hall, which would attach to the property title of the buyer’s other CBD property.

I am sure there are plenty of town in the US experimenting with similar programs.

But why should such rights be gifted in the first place, whether they are tradable or not? The physical attributes of property rights are a gift from nature, while legal property rights are costless for the State to produce.  Yet the rights are extremely valuable in the private market.

The chart below shows the gains to private property owners when town-planning rules allow them greater development intensity.  In red is the property value reflecting the previous highest and best use allowable under the plan, or the property right as it was previously defined.  The blue area is the gain – the economic rent, or the value uplift – that the owner receives for doing absolutely nothing (except maybe some political lobbying). 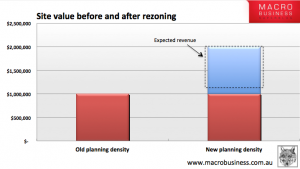 The dotted box is the revenue I expect the government to make from selling new development rights created under planning instruments to land owners, which will probably be a fraction less than the full rent.

How does this work in practice?

A property owner would seek a planning approval under existing planning assessments. The approval would stipulate how many of the rights they would be required to purchase to proceed. If they gain an approval for the maximum allowable development, they need to buy that amount.  But if they seek approval for a lower density development, they may only need to purchase the rights reflecting the proposed density.  These rights could be packaged in increments of Gross Floor Area (GFC), say 100sqm, for each type of land use allowable under the plan, such as commercial, industrial or residential. The would sit in a pubic register, and transaction recods would be publicly available.

The relevant council entity could determine a set price for the new rights for each area under the plan using simple valuation tools.  Alternatively they could host auctions periodically for a fixed quantity of rights.

This proposal has a number of benefits

The revenue to councils can be used to reduce other distortionary taxes and fees, and support better provision of local community services.  It would also level the playing field in the development industry by removing the rent-seeking element of competition, and is an effective way of sharing gains from urban development with the broader community.

Jobs lift all about bullshit

Via the ABC: Australia's official unemployment

A nationwide survey of international students and