Li Daokui, academic advisor and member of the monetary policy committee of the People’s Bank of China, spoke last Saturday on the inflation outlook of China as well as real estate market regulation, according to Xinhua.

Although there has been some noise about easing real estate curbs amid recent aggressive price cutting and subsequent protests, Li Daokui’s view is consistent with Premier Wen Jiabao’s view that curbs will be remain in place.  He believes that economic growth will slow, and the growth model which relies on real estate development will end.

He added that inflation in China will probably fall from about 5.5% for this year to just 2.8% next year, as there is a very strong cyclicality to inflation in China. 60% of inflation came from agricultural products this year, and 20% from pork prices, and major investments on that front should stabilise the situation.

Curiously though, he also thinks that there will not be any major monetary policy easing for the next 5 to 10 years.

I am not sure what to make of this.  Certainly I expect inflation to come down as growth slows, but I am less sure about the rate of inflation next year.  An inflation rate of 2.8% could be a good news for investors hoping for monetary easing, but it is curious that he does not seem to believe that that monetary easing will happen.

Meanwhile, in Hong Kong, the tightness of policy is having dramatic effects. Yesterday, the Hong Kong Monetary Authority published the latest sets of monetary statistics for September.

Total deposits decreased by 0.2% in September, with Hong Kong dollar deposits falling by 0.3%.  Foreign currency deposits also fell by 0.1%, but renminbi deposits continued to grow by 2.2% in September.

Total loans increased by 0.9%, and in particular, loans for outside use increased by 3.2%.  The loan-to-deposit ratio continued to increase in September, which stood at 86.6% at the end of September, increased from 85.9% in August. Here are the charts: Monetary condition in Hong Kong, if measured in terms of mortgage rates, have risen by at least 200-225 basis points since the end of first quarter, and probably about 100-150 basis points if measured in terms of fixed deposit rates.  This is a remarkably fast tightening of monetary condition and real estate is suffering with transaction volumes collapsing, even though prices are still holding up for the time being: 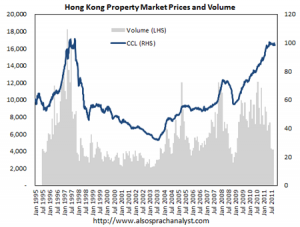 Transaction volume is also taking a hit after the announcement of a special stamp duty.  However, as you can see, the last leg of the bull market was completed on the back of declining volume.  As the spill over effects of tightening in China became apparent in Spring this year and banks start raising mortgage rates (and subsequently also fixed deposit rates), transaction volume has deteriorated further.

All else being equal, I am maintaining my bearish stance on the Hong Kong property market unless monetary condition can be meaningfully eased either by the premature monetary easing of the People’s Bank of China and/or very aggressive measures from the Federal Reserve (e.g. NGDP path targeting, which implies a possible commitment of unlimited asset purchases), which are both unlikely in the near-term.