Over the last few days, we’ve had an avalanche of Chinese data for August and the results were solid. Industrial production for August increased by 13.5% compared to a year ago, slightly slower than 14.0% growth in July, and lower than the consensus of 13.7% growth: 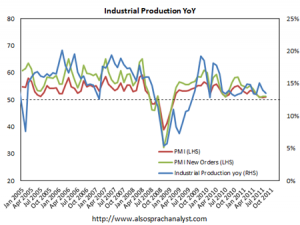 Retail sales for August increased by 17.0% over a year ago, declined slightly from 17.2% growth in July, and in-line with the consensus: On the whole, these numbers show that the economy is still robust for the time being.

Also contributing to the positive month was the external position for the month. The General Administration of Custom of China published the latest set of trade figures.  Trade surplus for August decreased 44% from US$31.5 billion in June to US$17.5 billion vs. consensus of US$24.1 billion.  On an year-on-year basis, the surplus decreased by 10.9%. Both import and export growth increased more than expected on an year-on-year basis, yet imports growth on a month-on-month basis is certainly more impressive.  As always, I don’t usually read too much into one-month of data, but in this respect, it suggests that the economy is still robust for the time being.  On the export side, however, even though we have a stronger than expected annual growth rate, export is down on a month-on-month basis.  We do know that external demand might have been weakening due to the slowdown in the developed countries, and we have had a sub-50 new export order index within the PMI, indicating contraction of exports demand.  Taken as a whole, I believe it is more of a mixed picture.

Finally, the People’s Bank of China published the latest set of monetary statistics, which paints a somewhat mixed picture. The surprise on the downside is that money supply growth continues to fall, and it is now well below the average growth even before the uber-expansion of money and credit after the financial crisis. Of course, this is still a pretty rapid expansion on an year-on-year basis, but at least my view is that in terms of money supply, the central bank is headed in the right direction.  I hope that the money supply growth continues to slow to low double-digit or high single-digit.  Of course, monetary policy will not transmit into price levels immediately, and slowing monetary growth will only have a meaningful impact on prices after 6-12 months.  At this point, I still maintain that inflation remains high, such that there is no reason to ease policy.