RPData has put out their latest newsletter today and once again it isn’t great news for the housing market.

The RP Data-Rismark Home Value Index results for May 2011 will be released next week and there is little evidence to suggest that there will be any significant change to market conditions with values likely to be flat to slightly falling across the combined capitals. Listings remain elevated, transaction volumes are running around 14% below the five year average, clearance rates are relatively weak and the market is typically a lot quieter during the middle of the year.

The rate of new listings is definitely slowing but this can be expected for this time of year. The number total listing is trending off which sounds positive for the market even if the stock on market is so high. I however suspect that what is actually happening is that vendors who can’t sell are moving their houses off the sales listings and onto the rent listings ( something that I have previously talked about ). The latest rental data supports this theory. The auction clearance rate trend from RPData is something I have collated previously. You can see that both Sydney and Melbourne are in a downward trend and have been since 2009. 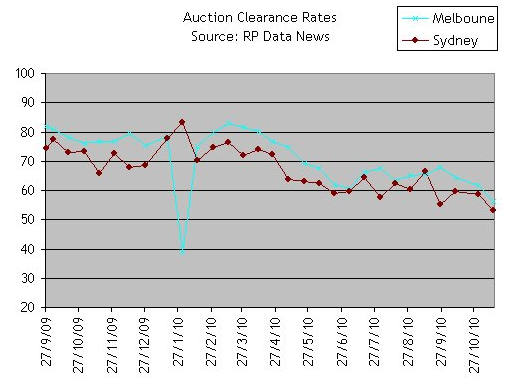 I took a look at this year’s data today and you can see that both Sydney and Melbourne are continuing on their downward path and are now reaching into the 40s which is nearly 50% less than 2 years ago.

In a follow-up to their previous information on best and worst performing capital city LGAs (based on change in median price), RPData have released the same for regional areas. The big topic in the housing market at the moment is population growth and I noted today that The Age had a somewhat hysterical take on the latest data.

Net migration to Australia is in free fall. In two years, migration has plunged by almost half, intensifying the skills shortages that threaten to drive up interest rates.

Cameron Krusher has a little more responsible take on the data at the RPData blog and includes some nice charts to put some historical perspective on those “free-falling” and “plunging” numbers.

Mr Kusher also points out that once again Queensland takes the wooden spoon.

The bad news for Queensland is also supported by a recent news item from RPData which has some pretty worrisome figures for those involved in the Queensland housing market. This item also provides some extra information that seemed to have been missing from their previous report, although I am not exactly sure what a “valuation adjustment” is in the context of housing.

Some people are pointing to the January floods weighing down the south-east Queensland market.  Yes the floods impacted the market however, the market was weakening before the floods and has continued to do so after the floods.  The ongoing poor performance is being reflected by an increase in property listings, an increase in the time it takes to sell a property and greater discounts having to be offered by vendors in order to sell.

Vendor discounting is the difference between the price at which a property is initially listed for sale and the price it ultimately sells for.  As at March 2011, Brisbane vendors were discounting the asking price on houses by an average of 7.7 per cent and units by 7.9 per cent.  That means a house being advertised for $500,000 would, on average, sell for $461,500, a discount of $38,500.  At the same time last year (when the market was still not particularly strong) discounts were recorded at 6.0 per cent for houses and 4.7 per cent for units.

Although time on market and vendor discounting has increased dramatically, the number of properties advertised for sale across Brisbane is now starting to ease.  Compared to the same time last year, the total number of properties available for sale at the moment is just 27.9 per cent higher.  Despite the large disparity the introduction of new stock is slowing with new listings currently just 0.3 per cent higher than they were at the same time last year.

Property Dexter believes that there are three main reasons why the South East Queensland housing market is so weak: a slowdown in population growth into the region (particularly from interstate), the weak tourism market and a hangover from the strong capital gains in recent years.

Quite simply people from New South Wales and Victoria aren’t moving to the region in the same droves as they once were.  Following the Global Financial Crisis (GFC), ‘sea changers’ are playing very little part in the current market and retirees are much more cautious about selling up their home and making the move to a coastal location.  Also over recent years the gap between housing prices in Queensland markets compared to Sydney and Melbourne has closed significantly.  With the recent under performance of the Queensland property market the gap is now widening again.

Although Brisbane isn’t exactly a tourism hotbed, the same can’t be said of the Gold and Sunshine Coasts.  The high Australian dollar and the GFC have dampened tourism numbers and this is impacting South East Queensland and most coastal markets of the state.

I also noticed that in RPData’s latest video-blog ( available at the end of the post ) that Tim Lawless snuck in a version of a chart that I had mentioned had gone missing in their most recent press release, so I thought I would show it here.

Overall I agree with RPData as I don’t think much has changed. We are still seeing declines across the board and long running trends holding. I still can’t see much in the way of pick-up even in the depressed markets where you would expect to see lower prices pushing up demand. It may be happening in pockets, but I certainly can’t see it in the data. Listening to Tim Lawless in the following video probably won’t fill you with much confidence in the market either.