As most of us will have heard, we’re a blessed country entering a second mining boom that is starting up after the first one was doused by the GFC in 2007.  This second boom will be longer and stronger than all before it, improving our terms of trade beyond anything this sunburnt country has experienced (see Saul Eslakes article here).  Happy days.

For the most part this concept is correct.  We are indeed entering a mining boom, especially with mammoth projects like Gorgon and Pluto powering ahead in Western Australia.  There are also many new coal mines on the drawing board on the east coast, along with new ports and a burgeoning coal-seam gas industry in central Queensland. Happy days indeed.

The flip side to all this mining boom awesomeness is a very strong Australian dollar.  With the US printing presses churning out new Ben Franklins, our RBA all-too-happy to raise interest rates and China devouring our raw materials, the AUD has smashed through parity with the USD and stayed up there.  This is great for our internet purchases and the price of TVs in JB Hi Fi, as well as our swelling national pride.  However, it is rather bad for our exporters.  Trying to sell Australian goods and services overseas is a lot harder when they become very expensive to international customers.  Just ask The Lorax.

But one thing many investors forget as they watch the AUD track ever-higher is that our miners are exporters too. Every time the Aussie dollar goes up a bip, BHP, Rio and Fortesque lose money.  Almost every mineral commodity we export is traded in US dollars, so when the US dollar drops against the Aussie, our miners get less Australian dollars to distribute as dividends or reinvest in bigger trucks.

As a case study, I am going to look at BHP.  As far as Australian miners goes, it’s the bees-knees.  A well diversified portfolio, great return on equity, great cashflow, low debt and it’s the biggest miner on the planet.  Sure it’s had a few M&A knockbacks as of late, but when you’re the size of BHP regulators get nervous about letting you have another growth spurt.

From an assets perspective, BHP is still a fairly “Australian” miner.  Out of the $63.7B in non-current assets on its book, 55% are in located in Australia (see pie chart). Iron ore and metallurgical coal – commodities which are primarily mined in their Australian operations – make up 33% of their revenues.

This means that a fair chunk of BHP’s profits (which are denominated in USD) come from operations using Australian dollars.  Another 23% of their revenue comes from South America (mostly Brazil and Chile) and South Africa.  These facts are highlighted by the following statement in the 2010 annual report:

The US dollar is the currency in which the majority of our sales are denominated. Operating costs are influenced by the currencies of those countries where our mines and processing plants are located and also by those currencies in which the costs of imported equipment and services are determined. The Australian dollar, South African rand, Chilean peso, Brazilian real and US dollar are the most important currencies influencing our operating costs.

This is especially important given BHP doesn’t actively hedge their sales, according to their FY10 annual report.

I’ve captured 10 years worth of currency histories of the AUD, South African Rand (ZAR) and Brazilian Real and shown them below (courtesy of XE currencies). I am not a currency trader by any means, but it seems the three currency graphs exhibit the same behaviour.  When the AUD strengthens, then the ZRA and BRL also strengthen.  As such, all three of these regions should see a decrease in profits when the US dollar depreciates (assuming commodity prices stay the same).

In BHP’s 2010 annual report, the affect of USD movements were summarised thusly:

Local currency costs were well controlled across the Group; however, the weaker US dollar had a negative exchange rate impact of US$2,150 million.

For your reference, the AUD/USD chart for the FY10 period is shown below. 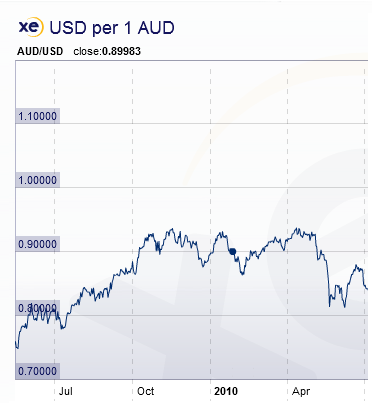 So what I am trying to say is that big upward movements in the AUD can result in big downward movements of BHP (and most other major Aussie miners) profits.

SO WHY DOES EVERYONE STILL LOVE BHP?

If a lower USD means lower profits, then why is BHP so loved?  Simple – the prices of the commodities it mines and sells have increased more than the AUD has.  Below is a chart showing the percentage change in monthly thermal coal, iron ore and petroleum prices since 2007 (courtesy of www.indexmundi.com).

As you can see, all three have been on a tear since 2010 – especially iron ore.  Given that iron ore, coal and petroleum made up 46% of BHP’s revenues in FY10, it is easy to see why the market loves BHP (see chart below).

Of course, one of the drivers behind the higher AUD is the higher price of commodities.  Whilst China is growing (and consuming materials) and our interest rates are higher than those of the US, the AUD will increase along with commodity prices.  The commodities are driving the AUD, not the other way around.

The profit of a mining company as big as BHP is dependent on many factors, currency movements being only one of them.  Obviously commodity prices are the most important, however there are also operating costs at each mine ($300/t for coal is no good if it costs $400 to get it out of the ground), geological conditions, acts of nature, industrial relations and asset depreciation regimes to name just a few.   However, in a utopian world where “all things are equal”, the profitability of a company like BHP will drop when the currency in which it sells commodities also drops.  In other words, when the USD goes down so does BHP’s profit (with the all important “all-things-are-equal” caveat).

What this means is that investors we need to keep an eye on not just commodity prices but also the AUD/USD ratio.  If we look at those three major commodities vs the AUD/USD price change since July 2009 (below) we can see that things are looking very rosy for BHP and Aussie miners.  Commodity price increases have far outstripped the increase in the Australian dollar. So what does all this mean for Australian resource stocks?  Well if commodity prices stay where they are, the AUD could appreciate a lot further before BHP and its brethren start feeling the currency pinch (ignoring any hedging policies BHP’s competitors may have). That’s a big if though, especially when you see the massive jump in iron ore prices.  China can’t keep absorbing price increases like that forever without increase the price of the goods it exports.

As stated before, it also doesn’t account for non-currency issues like underlying demand, operations costs, acts of nature and political/legislative risks.  That last point is very salient when your biggest customer is a communist state with a history of altering markets with rulings by decree.

The other factor to keep in mind is what currency assumptions are built into the current share price.  Is the market assuming commodity prices and the AUD will stay where they are?  Will the AUD move in lock-step with any commodity increase?  Will commodities and the AUD decouple?

At Empire Investing we consider BHP a good company – its books are nice, but it has no competitive advantage and is hostage to commodity prices.  We base our valuations on BHP maintaining ROE of 35% for FY12, falling to 25% over the next 5 years.  This gives us a value of about $41, but we wouldn’t buy it for anything over $33 – we’d want a 25% discount to value given the risks mentioned above.

Our assumptions mean a big drop in ROE over the next few years, but we’re conservative investors by nature.  It reflects our thoughts on the AUD, the risks behind the China boom as well as the impending increase in supply that elevated prices will bring.  After all, that’s what markets do.

If you’re a believer in a decades-long Chindia boom that will vacuum up our natural resources, then a stock like BHP is for you.  However, we’re a little worried about the sustainability of current commodity prices as well as the assumption that Chinese demand is insatiable.  We’d buy it, but only after a commodities correction lowers the share price into our buy range.

Disclosure: The author is a Director of a private investment company (Empire Investing Pty Ltd), which has no interest in any business mentioned in this article.  The article is not to be taken as investment advice and the views expressed are opinions only.  Readers should seek advice from someone who claims to be qualified before considering allocating capital in any investment.

Some solid gains to finish the week on Asian

DXY was firm overnight: AUD is right at