Standard and Poors last night placed the outlook for the US’s AAA rating on negative watch for a potential downgrade citing not just this recent budgetary impasse but also the trajectory of the United States Governments debt position. The charts below show just why S&P is worried.

It’s common these days to think of debt in terms of a ratio to GDP and this chart, data from Bloomberg, highlights an alarming trajectory for the US’s fiscal position. Even the most conservative extrapolation of this trend would end in tears: 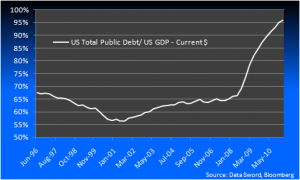 Now look at the monthly deficit position going back to October 1999 (the first month of the 2000 budget) through to the latest release as at March of this year overlaid with the rolling 12 month budget deficits for each year. The US budget woes, while already deteriorating ahead of the GFC have gotten significantly worse since: 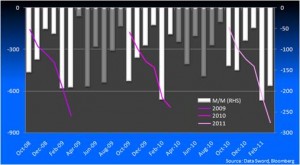 But the truly scary thing, at least for holders of US debt and dollars is the continued acceleration this year. If we take a look at the outcomes of the first 6 months of deficits from the last 3 years we can see that the 2011 budget deficit is on track to exceed both 2010 and even 2009 despite an ‘economic recovery’: The United States has a deficit and debt problem and the political classes are playing politics. It’s obvious why S&P are worried. When will investors be???