On Tuesday I published Part 1 of a two part series on healthcare stocks.  I described how the health care industry is in a market sweet spot – high levels of government support, recession-proof demand and a large group of wealthy, ageing consumers (Boomers) entering a time of their life where healthcare expenditure will significantly increase.

Unfortunately there are many health care companies which are squandering this golden opportunity.  In the companies I reviewed on Tuesday, there was a common theme of excessive debt and very high intangibles.  This seemed to indicate an empire-building culture, where over-priced M&As are used to grow the size of the parent.

Well, today is TGIF day so it’s time for a more positive post.  I promised to review some investment-worthy healthcare companies, so without further ado I give you four Excellent Elixirs of the ASX.

Anyone who hasn’t heard of Cochlear probably needs some of their products.  Their devices replace components of the inner ear that have been damaged, allowing the recipient to hear again.  They are the global leader in their field, operating in over 100 companies.  In fact their company name has become almost synonymous with the term “ear implants”.

Cochlear’s return on equity (ROE) has average a stellar 44% over the last 5 years, as shown in the graph.  They’ve managed to maintain this high ROE despite their increasing size – equity per share has increased from just under $1.00 in 2000 to almost $8.00 per share in FY10.  Net debt is very low at $20M, especially compared to FY10’s after-tax profit of $155M.  In contrast to other healthcare companies, COH’s intangible assets represent true economic goodwill – $0.89 of intangible assets per share vs $2.84 in earnings.

COH is one of the few truly wonderful companies on the ASX.  It has great ROE, low debt, great capital management, a world-recognised name and an ongoing focus on product development.  At Empire we think COH is trading at around value right about now, so we’d like a discount before purchasing any more.  None the less, COH is a very healthy healthcare stock.

Cellestis is an interesting company that may be a proto COH-type company.  Over the last 10 years it has been researching, developing and obtaining approval for a substitute to the 100 year-old TB test.  Instead of a skin scrape test, CSTs QuantiFERON technology works through taking blood samples.  Tests have reportedly shown CST’s TB methods are actually more accurate than the standard skin-scrape test, whilst CST claims it saves time, labour and reagent costs.  In recent years it has obtained approval to sell its QuantiFERON products and it has seen increasing acceptance in the Australian, US and European markets. CST starting turning a profit in 2008 and has averaged an ROE of 35% in that time.  The company has zero debt (awesome) and zero intangibles (more awesome) whilst sales revenues in all its market segments are on the increase (awesomest).  The man leading the company is Dr Anthony Radford who is also the founder and key developer of CSTs products.  With increasing acceptance, good ROE and excellent IP assets, CST is one health stock Empire will be keeping a close eye on in the future.

It’s hard to put a value on CST with such a small profit-making timeframe, but we’d like to see it below $2.60 before considering a purchase.

Blackmores is one of the best-known vitamin and supplements suppliers in Australia.  They rose to market pre-eminence after the collapse of major competitor Pan Pharmaceuticals in 2003 due to a contamination scandal.  This left BKL with a dominant market position and a trusted imaged. Since the collapse BKL have capitalised on their dominance, maintaining ROEs between 40% and 50%.  Net debt sits at about $30M, compared to an FY10 profit of $24.3M.  Despite their well-known brand name and continual product development, intangible assets are a very low $0.10 per share, compared to earnings per share of $1.75.

BKL recently upgraded their warehousing facilities and are now expanding into Asian markets, with approximately 14% of FY10’s revenues coming outside of Australian and NZ.  At the moment we think BKL is a little pricey, preferring to see it down around the low $20s to ensure a decent discount to value.

The oddly-named 1300 Smiles (it’s a phone number) is a dentistry-based corporation.  It provides dental surgery offices/rooms, practice management and other administrative services to self employed dentists. It also provides general dentistry services to patients.  ONT is basically corporatising what is traditionally an SME industry by allowing dentists to focus on the delivery of dental services rather than on the administrative aspects of their businesses.  Starting out in Townsville, they have spread south and now have locations as far south as the Tweed. 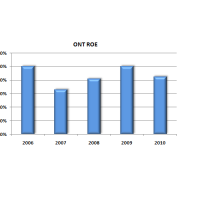 The ROE for ONT has averaged an impressive 43% over the last 5 years.  Net debt at $3.3M is lower than FY10’s NPAT of 3.9M, which is a very good sign.  Admittedly intangibles are a little high at $0.46 per share, but this is a result of buying out existing practices to convert to ONTs business model.  However with earnings per share of $0.18 things could be worse on the intangibles front, but it will require monitoring into the future.

We think ONT is about 20 cents over value at the moment, but with continuing expansion, a large un-tapped market and a proven business model it is definitely a health care stock one to watch.

So there you have it – four healthcare stocks that will actually be good for your portfolio’s health.  COH is the stand out in an already classy field, whilst CST is a dark horse that may become the next Aussie biotech success story.  The only dark cloud in an otherwise sunny sky for these two is forex risk as most of their revenue is off-shore.

ONT has a huge swath of the country’s dental market to expand into and Boomers will pill-pop for as long as BKL is willing to sell them cod-liver oil and ginko biloba.  ONT needs to watch out for possible over-reach in pursuing new stores whilst talk of including dental services in Medicare is a big unknown for the whole dental industry.  BKL may find things a little tough given recent consumer caution because vitamins aren’t cheap and despite marketing claims to the contrary, we can live without supplements.

All things being equal though, are definitely investment-grade. They are characterised by high ROEs, low debt and great branding or business models.  As always the value investor should try and pick them up at a discount to value, so be on the watch for a market correction or some one-off bad news event – because these little ASX tonics will cure what ails you.

PS: sorry about the graphs – still getting used to WordPress.

While the NASDAQ was unchanged overnight, the

Not a pretty sight across stock markets here in

For the past year or so, we have watched in