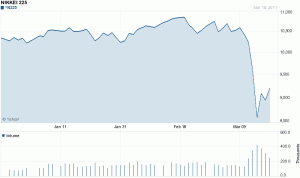 UBS is reasonably bullish on the effects of the earthquake on Australia’s trade. Its analysis is fairly typical of the sentiment in the market about the disaster. UBS notes that Australia exported $44 billion last year to Japan, which accounted for 19% of all exports. Of that, 87% is resources, dominated by coal, iron ore and LNG. Australian is also in the top three of recipients of outbound portfolio investment (after the US and UK). UBS is of the opinion that there will not be large repatriation of funds to Japan because the government will bear the reconstruction costs and if there is a need for liquidity institutional investors are more likely to turn to Japanese government bonds. Japan’s hermetically sealed financial system – in which almost everything is owed to itself – will remain.

UBS predicts Australia’s exports will be slightly negative in the short term and positive in the medium term. JP Morgan singles out Qantas for being adversely affected, with a $40 million drop in profit before tax. The Australia-Japan route counts for about 9 per cent of Qantas’ capacity. But Morgan still has an overweight recommendation.

The future of uranium is obviously more uncertain, although it is early yet. Morningstar retains a buy on ERA noting that the company “hasn’t been blessed with overproduction of late”. Morningstar thinks the tsunami may be another excuse for BHP to delay its decision on Olympic Dam. Morningstar has an accumulate recommendation on the stock.

LNG is an obvious winner, so Morningstar makes the predictable call with a buy recommendation on Woodside. It has a buy on Equinox Minerals and an accumulate call on Mt Gibson.

While the NASDAQ was unchanged overnight, the

Not a pretty sight across stock markets here in

For the past year or so, we have watched in