By Leith van Onselen Two years ago, the Sunday Telegraph published an article citing Commsec research showing the sharp deterioration of housing affordability over the past 50 years: AUSTRALIANS have to work almost three times harder to pay off the average family home than they did 50 years ago. Figures compiled by CommSec for The

Please find below a press release from SQM Research questioning the efficacy of the RP Data-Rismark daily home values index: Upon the back on recent commentary released by RP Data-Rismark in relation to increasing house prices in Australia, property research house SQM Research would like to take this opportunity to formally state our contrasting beliefs

By Leith van Onselen Auction clearance rates over the weekend were 59% in Australia’s two major markets – Sydney and Melbourne. This compares to a year-to-date average of 62% and 61% respectively, according to the Real Estate Institutes of New South Wales and Victoria. In Victoria – usually the auction capital of Australia – the

By Leith van Onselen The RP Data-Rismark house price results for June are out and national capital city home values have clawed back around two-thirds of May’s losses, increasing 0.97% over the month. A summary of the key results are provided in the below table: The below chart shows the daily price movements by capital

By Leith van Onselen The Reserve Bank of Australia (RBA) has just released the private sector credit aggregates, which registered a small increase in total credit in the month of May, but the equal second lowest monthly housing credit growth in the series’ 35-year history and the lowest annual mortgage growth ever recorded: Total credit

Here’s a reasonable take on the housing market from Shane Oliver echoing many of my own thoughts on the slow melt. Aust House Prices – OI #21 2012

By Leith van Onselen Last week’s revelation that the number of households disclosed in the 2011 Census was some 900,000 less than that assumed by the National Housing Supply Council (NHSC) appears to have prompted a rear guard action from one of Australia’s key housing shortage proponents – the ANZ Bank. Over a number of

By Leith van Onselen The RP Data-Rismark daily home values index has, for the fourth week in a row, registered a weekly rise, with national capital city home values registering a 0.32% increase in the week to 27 June 2012 (see below chart). This week’s rise was driven primarily by Australia’s two largest markets –

By Leith van Onselen It seems everyone is turning on the Melbourne housing market. Earlier this week, the Real Estate Institute of Victoria (REIV) capitulated, noting that Melbourne would see no house price growth in the short-term and, at best, only moderate price growth over the medium-term. The REIV’s analysis was joined by the generally

By Leith van Onselen As noted previously, the Budgets of Australia’s state governments are suffering badly from a sharp drop in stamp duty receipts on housing transfers, which in 2011-12 are expected to be -20% below the levels of 2007-08 (see below chart). In addition to lower housing prices, a key driver behind the fall

By Leith van Onselen House price analysis has just gotten more confusing after Residex released its home price results for May, which recorded a monthly rise of 1.01% nationally for houses and 0.02% for units (see below tables). The result contradict those of RP Data, which reported a fall of -1.8% for houses and a

By Leith van Onselen The release of the 2012 REIV State of the Victorian Property Market report (below) provides a sobering assessment. According to the REIV, transaction levels – both private sales and auctions – are well down on the five-year average (see below table). Which, given that transaction volumes typically drives prices, suggests that

By Leith van Onselen The so-called housing shortage, which has been used by the property industry as an excuse for Australia’s overpriced housing, has been exposed by the 2011 Census figures. The Census revealed that the number of households in Australia is some 1 million less than assumed by the National Housing Supply Council (NHSC) 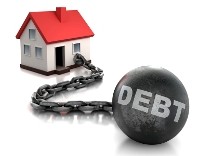 This morning Banking Day has delivered a snap shot of some key household metrics for mortgages and income from the first batch of Census data. I will address the Census over the next week but for the time being this is a good wrap of some headline results: Four things stand out from the 2011 census,

By Leith van Onselen Following the release yesterday by the ABS of the Australian Demographic Statistics for the December quarter of 2011, I decided to crunch the numbers to determine how Australia’s population and migration numbers are tracking. According to the ABS, Australia’s population grew by 1.4% in the 2011 calendar year, which was the

By Leith van Onselen Earthsharing Australia has released the 2012 Speculative Vacancies in Melbourne Report (below), which shows a vacancy rate in Melbourne of 5.90%, which is a slight increase from 2010, although still below that recorded for 2008 and 2009 (see below table). According to the report, there is an estimated 90,700 vacant houses

By Leith van Onselen The Australian Bureau of Statistics (ABS) has just released the Australian Demographic Statistics for the December quarter of 2011, which recorded an increase in the estimated rate of growth of Australia’s population to 1.4% (302,600 persons) over the 12 months to December 2011. This was the fastest rate of population growth

By Leith van Onselen After seven consecutive weeks of declines until the end of May, the RP Data-Rismark daily home values index has, for the third week in a row, registered a weekly rise, with national capital city home values registering a 0.29% increase in the week to 20 June 2012 (see below chart). Surprisingly,

By Leith van Onselen SQM Research has released its rental vacancies report for the month of May, which revealed that the vacancy rate nationally has remained flat at 1.8%, with Melbourne (3.1% vacancy rate) once again leading the nation. Year-on-year however, vacancies have risen by 7,270, with the national vacancy rate increasing by 0.2% since

Global Macro: Do not put your faith in the false deities of economists (Financial Times) Just how at-risk are investment managers to the disruption of algorithmic investment models? (Absolute Returns) Egyptian Elections And Israeli Escalations (Zero Hedge) Roubini: The Global Perfect Storm (Pragmatic Capitalism) “Today’s retirees are living through what might prove to have been

By Leith van Onselen The recent 75 basis points of cuts to official interest rates since early – May appears to have done little to reinvigorate the auction market, which turned in a lacklustre performance over the weekend, particularly in Melbourne. According to the Real Estate Institute of Victoria (REIV), Melbourne recorded an auction clearance

By Leith van Onselen Last week, the Queensland Department of Environment and Resource Management (DERM) released data on housing transfers and mortgage lodgements. Like the Victorian Department of Sustainability and Environment statistics analysed last week, which showed ongoing deleveraging, the DERM data is current to May 2012, so it leads the Australian Bureau of Statistics

By Leith van Onselen RP Data has released its June wrap of the Australian housing market (video below) which, as always, makes for some good viewing. The video covers housing market conditions and prices as at end-May 2012, where dwelling values fell by -1.4% over the month, which was the worst result since 2008 at