By Leith van Onselen in Economics

By Leith van Onselen Paul Wallbank has today posted an interesting article on the big changes taking place in the personal computer market as new market entrants and technologies increasing displace incumbents and former market leaders: One of the truisms of modern business is that no incumbent is safe, Microsoft, Nokia and Hauwei are good

By Leith van Onselen In today’s Statement of Monetary Policy (SoMP), the Reserve Bank of Australia (RBA) said the following about the prospects of pick-up in dwelling construction, which the RBA is hoping will fill the void left as the mining investment boom unwinds: There are signs of an increasing appetite for borrowing in the

By Leith van Onselen Late yesterday, Veda released its Consumer Credit Demand Index results for the March quarter of 2013, which registered the biggest year-on-year rise in overall consumer credit demand since the onset of the Global Financial Crisis (GFC), driven by strong growth in personal loan applications. However, growth in the number of mortgage

By Leith van Onselen The Queensland Department of Environment and Resource Management (DERM) yesterday released data on housing transfers and mortgage lodgements for the months of March and April. According to DERM, the number of housing transfers rose by 2.6% in March and by 10.6% in April. Similarly, the number of mortgage lodgements increased by

By Leith van Onselen Fitch Ratings agency has today warned Australia’s banks that that they need to improve their funding mix if they are to meet Basel III liquidity requirements and retain their coveted AA- credit ratings: Fitch Ratings-Sydney/Singapore/London-09 May 2013: Australian banks need to continue to improve their funding mix to meet Basel III 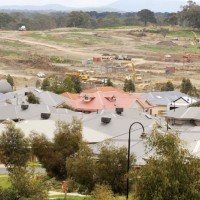 By Leith van Onselen Developer Mirvac today released its Q3 operational update and strategic review, which confessed that the company has been hurt by: paying too much for residential land; inappropriate deal structures; creating too much higher end product in shallow markets; and proceeding to build for reasons unrelated to market fundamentals. Mirvac also revealed

By Leith van Onselen As summarised earlier by Houses & Holes, the Australian Bureau of Statistics (ABS) has released labour force data for the month of April, which reported no change in the the headline unemployment rate (i.e. still 5.5% after March’s figure was revised down from 5.6%),  but a seasonally-adjusted 50,100 (0.4%) increase in

By Leith van Onselen The Real Estate Institute of Australia (REIA) has today issued a media release (below) defending negative gearing and lobbying against any changes. Let’s examine the REIA’s arguments: The Real Estate Institute of Australia President, Mr Peter Bushby, says the Government should retain negative gearing for property investment in its current form.

By Leith van Onselen Hot on the heels of George Soros’ big short on the Australian dollar (AUD), Stanley Druckenmiller, founder of Duquesne Capital, has come out this morning calling an end to the commodity super cycle and recommending investors short the AUD. Speaking at the Sohn Investment Conference in New York, where he presented

By Leith van Onselen The Reserve Bank of Australia (RBA) yesterday released its monthly chart pack. The Pack (provided in full below) has 16 categories covering the state of the Australian and world economies, via diverse metrics and observations. I have reorganised the key charts as follows. Economic growth and employment: The main (but flawed)

By Leith van Onselen From Westpac today comes a fascinating new report (below), which supports MacroBusiness’ view that the run-down in savings and increased borrowings over the 1990s and 2000s was an anomaly that is unlikely to be repeated, and that higher savings rates and disleveraging are the “new normal”. The key points of the

By Leith van Onselen Yesterday’s overseas short-term arrivals and departures figures for Market provided a mixed blessing for Australia’s tourism industry, with the number of inbound and outbound tourists jumping sharply over the month. The number of short-term visitor arrivals increased by a seasonally-adjusted 2.3% in March, however, this was more than offset by a

By Leith van Onselen In February, the Australian Bureau of Statistics (ABS) released construction materials volumes data for the December quarter of 2012, which showed continued weakness in the production of concrete blocks, clay bricks, plasterboard, and roof tiles – materials typically used in housing construction. The Data released by the ABS is not seasonally-adjusted

By Leith van Onselen As noted earlier today, retail sales figures from the Australian Bureau of Statistics (ABS) revealed a -0.4% fall in the value of retail sales in March, with sales up by 1.6% over the quarter and by 3.2% over the year (see next chart). However, the ABS also provided quarterly data on

By Leith van Onselen I have written previously how Melbourne’s developers have been offering extraordinary incentives in a bid to stimulate sales of house and land packages. Now it appears the madness has spread to inner city apartment developers, which are offering big incentives to clear rising inventories amid Melbourne’s burgeoning apartment construction boom (see