As I thought would happen in last weekend’s analysis, a small correction occurred, ostensibly because of the Libyan crisis and the Christchurch earthquake, but most likely because of short term profit taking after earnings announcements.

The ASX200 is still trying to get past its mid-April 2010 high after almost a year of trading sideways. The 4800 point level has taken on a significant support level, with many new buyers stepping in on Friday after a classic reverse “J” fall in daily price action.

I know I keep harping on it, but 5000 is a key target level – as of next month it will be five years since that level was first broken. 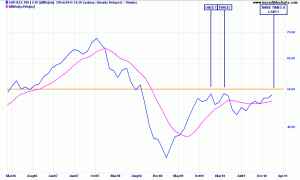 Third time is a charm?

The main culprits for this lack of positive action are “the twins” – RIO and BHP. The former has literally gone sideways since November last year. Whilst the latter keeps hitting significance resistance at $46.50 – note the long upper tails in the previous 3 weeks on the chart below. 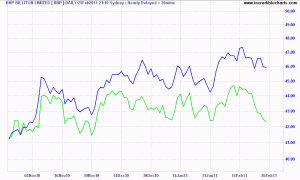 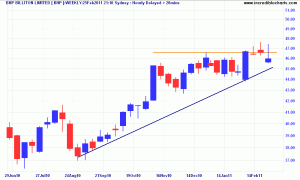 The banks are also struggling although NAB and WBC have recently broke out of a deflationary funk, but ANZ and CBA continue to shuffle sideways. Will the dividend yield hunters support future prices or is a more widespread price move underfoot?

A short term rally is on the cards

I contend that the local market is poised for a new short term rally that will likely run out of steam and correct by March or April, due to the withdrawal of artificial stimulus by the NY branch of the Federal Reserve, and the likely negative or flat Australian GDP print for the Jan-Mar quarter.

Here are my reasons:

The majority can only see unicorns and rainbows looking ahead, and particularly like the shiny cool factor of the resource sector, which has supported the entire earnings season.

Watch for a sectoral shift out of industrials – particularly consumer discretionary (except building materials) and into resources and their allied services. This is already evident on the weekly charts. 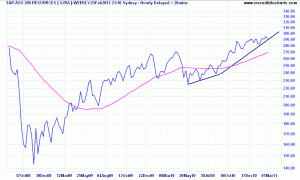 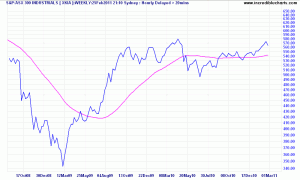 In the week ahead, I’m watching “the twins” to support a sectoral rally, that is likely to spill over into the broader market. Given Wall Street’s reaction on Friday to the Libya crisis (charter boat? what charter boat?) and consumer confidence now the highest in three years (and a raft of other measures “proving” that the US economy is also unicorns and rainbows), its safe to say that until The Bernank takes his hand off the lever, its buy the dip.

Disclosure: This blogger trades and may have underlying positions in all or any of the above mentioned companies and indices, both long and short. Like all endeavours, do your own research as none of the above constitutes investment or trading advice.

Asian stocks were mixed despite a rebound on

CS: Volatility will rise with the virus